Simple answer is the German word for highway or motorway is Autobahn. All three German-speaking nations, Germany, Austria and Switzerland use the word Autobahn for highways or motorways. Only thing that makes the German Autobahn famous is NO SPEED LIMIT.

After this sign, there would be no speed limit and end of all previous restrictions for passing / overtaking.

Passing/Overtaking restrictions can be as following:

Indicates the end of a no-passing zone for motor vehicles.

No Passing. Prohibits vehicles with a gross weight of over 3.5 tons and trucks or tractors pulling trailers to pass motor vehicles, except for two-wheeled motor vehicles.

End of no passing zone for trucks.

Only motor vehicles are allowed to use Autobahn. Vehicles, not capable of maintaining a speed of 60 kph (37 mph) are not allowed on the autobahn. For example, agriculture machines, tractors, mopeds, electric scooters or quads with top speeds of less than 60km/h are not allowed on Autobahn. Walking is also not permitted along the autobahn. Driving slower than 60 km/h due to any reason is not permitted. If for example, a vehicle has some mechanical fault and can't attain the speed of at least 60 km/h, it must leave the Autobahn on the next exit and use other roads.

Whether on Autobahn or any other road in Germany, drivers must have a warning triangle and a first aid kit with them in the vehicle. Absence of any of these can cause fine.

On Autobahn without speed limits, it is hard to estimate the speed of an approaching vehicle in rearview mirrors. One may think that he or she is driving very fast on Autobahn but there can be vehicles approaching at a more faster speed. High-speed Autobahn driving is part of driving school training. German driving schools teach their students in such a way that drivers should be on alert and be ready to recognize typical errors caused ofttimes by other drivers and be able to cover those errors.

There is a very strict rule on Autobahn and other roads in Germany, called Rechtsfahren (always stay in the right lane). The left lane should only be used for overtaking, except in special situations (for example, traffic jams, accidents). It is legal to remain in the left lane if you are waiting for the vehicle ahead to finish passing. Even if you are traveling at very high speed, there would be vehicles traveling faster than you. So, be aware and alert. While you are passing another vehicle, sometimes drivers behind you insist to leave the lane through blinking of headlights (it's called Lichthuppe in German). Just ignore them and complete your passing course.

Entry to Autobahns is only allowed at officially designated points marked by sign 330 . Similarly leaving Autobahn is only authorized at marked exit points, sign 333 . (Please check the full list of traffic signs).

While entering autobahn, drivers must yield the right-of-way to vehicles on the autobahn and using the outer-right merging lane (a thick broken white line), drivers must make sure that the road is clear before accelerating and entering.

Vehicles using exit lanes at autobahn intersections may drive faster than vehicles in the lane to their left after reaching the broken white lines that designate the exit lanes have begun (significantly wider traffic lane marking shortly before restricted area).

Actions Prohibited on Autobahn are:

Start of Autobahn. From this point on, all rules and regulations governing the Autobahn must be obeyed. Hitchhiking beyond this point is prohibited.

Direction to nearest Autobahn entrance and nearest city through this Autobahn.

Authorized exit from Autobahn Posted at autobahn exits. Exits marked by this sign are the only authorized exits from the autobahn.

Exit board on Autobahn (Indicates exit to the mentioned city/cities. Mainz and Wiesbaden are names of cities).

Direction to other Autobahns with city names and highway or Autobahn numbers. Yellow colored name indicates federal highway route to the mentioned city.

Autobahn distance sign, showing distance to major cities. Below the line are major cities via intersection along with their respective motorway number.

This sign indicates a Autobahn exit or a motorway interchange. The number in the circle indicates the interchange number.

This particular example sign means next exit from Autobahn to city of Düsseldorf-Berath is 1000m away.

Autobahn interchange/exit number. Every exit and interchange on Autobahn has a unique number, whether it's an exit to a rest area, another federal road or another Autobahn.

Indicates the number of the German Autobahn.

Direction sign inside a city or on Autobahn. Here showing the direction to Autobahn, Messe (fair), and two nearest cities with their respective highway number (if applicable). Yellow sings represent German federal highway and white signs are used to indicate a local area and small roads. Autobahn signs are always in blue color.

Kilometer marker. They are installed after every half kilometer. They can be used as location reference in case of emergency.

Work in process. Be aware of workers.

Indicates that a traffic jam (Stau) may be ahead.

Autobahn detour direction signs; these signs give advance information about turns i.e. turn left or right after the sign. While straight arrow to left or right indicates just right or left respectively.

Recommended alternate Autobahn route during heavy traffic or traffic jams. There can be a supplementary sign below indicating specific vehicles to take the recommended route.

Indicates the route, in solid black lines, to take to get back on the autobahn after having been detoured.

A layout of the detour route. It indicates road straight ahead is closed. Turn left, follow the route through village A and Village B, then turn right to take the route to the city of Stuttgart.

Detouring onto opposite lane. All lanes shift to the left of the median.

Detouring onto opposite lane. All lanes shift to the right of the median.

Lanes are splitting towards left of the median, as show in signs respectively. Sign 501-13 and 501-14 indicates one lane must crossover. Sign 501-15 indicates two of three lanes must shift to left.

Lanes are splitting towards right of the median, as show in signs respectively. Sign 501-23 and 501-24 indicates one lane must crossover. Sign 501-25 indicates two of three lanes must shift to left.

From straight ahead moving traffic, lanes are splitting towards the left of the median.

Use of hard shoulder as driving lane permitted.

No more use of hard shoulder as driving lane permitted.

leave the hard shoulder and merge to left lane. 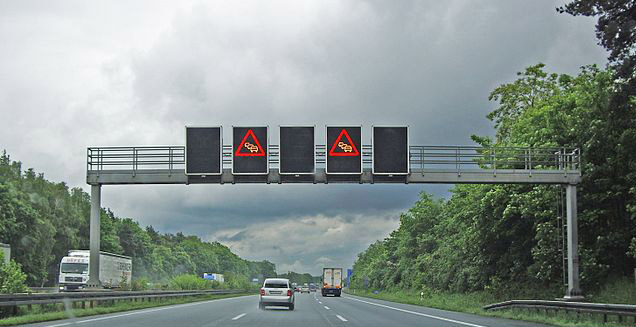 An example of digital road signs, at the moment showing the danger of congestion ahead.

Following is the map of 9 major Autobahns, from A1 to A9. 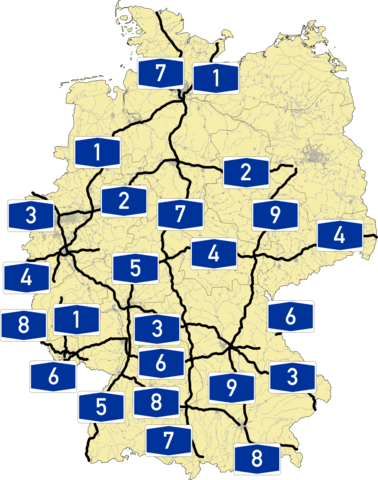 Below image is the spread patteren of Autobahn10 to Autobahn999. 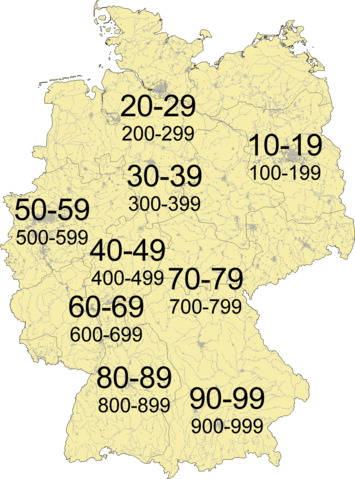 Which Autobahn sections are without speed limits?

The exact answer to the above question is not possible because speed limits are not permanently implemented. Speed limits are constantly changing on different sections of Autobahn.

Generally, Autobahns of former East German states have relatively low traffic. The best time for high speeding is during the weeks days and in the night hours especially after 12 A.M to 5 A.M.

Best time to enjoy the high speed on German Autobahn is when German national soccer team is playing. The whole nation enjoys the soccer match and Autobahn are free for high speeds.

Routes on Autobahn suitable for highspeed and with relatively low traffic

As per December 2018 update, following unrestricted (without speed limit) Autobahn sections are still noticed with relatively low traffic and are suitable for high speeds (above 120kph or 75mph).

A1: from Hamburg to Lübeck, between AS Bargteheide and Kreuz Lübeck

A1: from Schweich to Wittlich

A14: from Dresden to intersection with Hannover

A2: from Bad Oeynhausen to Bielefeld Ost

A2: from Halle to Magdeburg

A23: in Schleswig-Holstein from Pinneberg Nord to Itzehoe Süd and from Itzehoe Nord to Heide Süd

A24: the section between Hamburg and the Wittstock / Dosse intersection

A28: from Oldenburg Wechloy to the parking lot in front of Westerstede

A28: from Westerstede West to Dreieck Leer

A3: Oberhausen direction Cologne (direction south), between intersection Kaiserberg and intersection Breitscheid. Only in this direction. The opposite direction has speed limit of 120kph (75mph).

A3: between Straubing Autobahn entry / exit number 106 to Rosenhof entry / exit 103 in both directions and A3 till border of Holland

A3: from Siegburg direction Frankfurt – Westerwald

A3: shortly after Regensburg until shortly before Nuremberg

A30: from the Dutch border to the Lotter Kreuz (just before Osnabrück), exception: Schüttorfer Kreuz (interchange A30 / A31)

A38: whole section has low traffic

A39: Coming from Hamburg until just before Lüneburg Nord

A4: from Bucha to Klettbach

A42: from the end of Oberhausen direction Dortmund to Herne Wanne

A42: from Herne Crange to Duisburg until beginning of Oberhausen

A43: from AK Münster Süd to the exit Recklinghausen / Herten

A52: from exit Marl Frentrop to AK Marl Nord

A44: from Düsseldorf-Nord to Flughafen Düsseldorf (Duesseldorf airport) in both directions

A46: from Heinsberg to intersection Wanlo

A485: from Gießener Südkreuz to the junction with the B3 in direction north

A5: between Basel (Swiss border) and Bad Bellingen

A5: between between Autobahn exit number 37 Heidelberg and 26 Darmstadt intersection (Darmstädter Kreuz)

A5: between Karlsruhe and Walldorf

A5: from Grenze Weil am Rhein to Höhe Bad Bellingen

A524: in Duisburg, between Kreuz Breitscheid and Duisburg Rahm

A59: from beginning A46 to exit Rheindorf

A6: Between Kreuz Weinsberg (~ 500 meters after the driveway) and Bretzfeld

A6: from Hockenheim to Sinsheim

A60: between Bingen Ost and Heidesheim

A60: from Wittlich to the end of the extension at Prüm

A61: from Dannstadt until shortly before the exit on the B9 to Speyer

A61: from intersection Mönchengladbach to the border of Holland

A63: Between Mainz (Saulheim) and Kaiserslautern

A671: Mainz-Wiesbaden in both directions from the Mainbrücke bei Hochheim to the junction with A66

A7: between HH-Waltershof and Maschener Kreuz (only in direction south)

A7: in the direction of Kassel from the Göttingen exit until shortly before the intersection Drammetal

A7: north of Kassel-Nord crosses the Ellenbachstraße on the highway. From this bridge to the border of state of Lower Saxony is no speed limit.

A70: from the intersection Schweinfurt / Werneck to the exit Bamberg / harbor with the exception of the tunnel Schwarzer Berg. Tunnel has speed camera.

A73: from Lichtenfels to Bamberg and vice versa. You can drive fast here from Höhe Bad Staffelstein.

A8: from Luxembourg border to Tunnel Pellinger Berg (in both directions)

A8: from Wurmberg to intersection Leonberg

A9: from berlin to A4 Leipzig

A9: from Halle to Leipzig

A9: from Marktschorgast to Berg/Bad Steben (This section of A9 is famous for high speeding.)

A92: only the section from Moosburg Nord to Landshut (Altdorf) has speed limit of 120kph (75mph), otherwise no limits on A92.

A93: from Weiden to Regenstauf in both directions

A96: from Lindau to interchange Memmingen

B15: in direction north

B9: in the Rhineland-Palatinate (Rheinland-Pfalz), from the junction Germersheim to Karlsruhe. Though it's two lane Autobahn, but often empty.